Posted on March 26, 2015 | Comments Off on Sweets Way calls for support against evictions

Barnet Housing Action Group are a group campaigning around housing issues in The Borough of Barnet, North London. We have been working with the Our West Hendon campaign for the past year and have recently joined the Focus E15 Mums in occupying a house on the Sweets Way Estate in the North of the borough in protest against the evictions which have taken place there by Annington Homes Ltd, the owners of the houses and land. 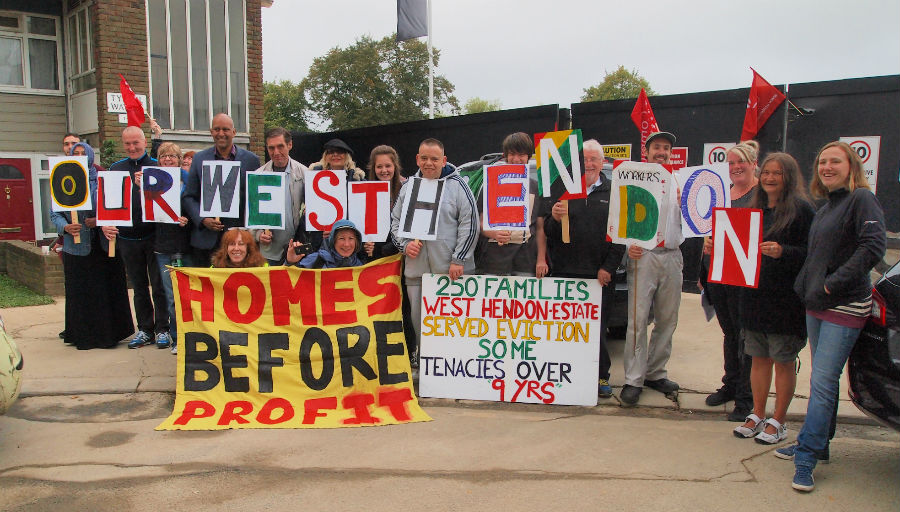 West Hendon is a council estate alongside a reservoir and conservation area known as ‘the Welsh Harp’. The estate comprises of a mix of 650 properties some secure tenancies, some private, some temporary non-secure tenants and also leaseholders. All of these homes are going to be bulldozed and replaced with 2000 luxury apartments – 214 of which – the non luxury of course – will be council flats.

The new luxury flats are being built alongside the Welsh Harp with beautiful views and open spaces whilst the secure council tenants are being moved into a block being built alongside the Edgware Rd in the middle of a gyratory one way system which used to be a car park. Their view will overlook the back of the mechanics garages and kebab shops on the Edgware Rd. Barnet council will not own the building, they will be leasing it from Metropolitan Housing Association. Barnet gave the land on which the West Hendon Estate currently stands to Barratt’s developers – FOR NOTHING!

The new development will be called Hendon Waterside but the West Hendon council tenants that get to remain on their estate won’t be anywhere near a drop of that water! The majority of people currently living on the estate will be ‘decanted’ to other areas; no one knows where until the very last minute of the ‘decanting’ process. The secure tenants still don’t know how much their rents will be and the leaseholders are fighting the Compulsory Purchase Orders put on their homes by Barnet Council which they are being forced to sell at thousands of pounds less than the market value. This scandal has prompted an 8 day public inquiry, the result of which is yet to be released. However even if the inquiry decides in their favour, Eric Pickles will have the last word on the final decision.

Meanwhile, on the other side of the borough – in the North of Barnet – we have a very recent campaign where a whole estate – 153 households, have been evicted because Barnet Council have given planning permission to the owners, Annington Homes, to bulldoze the whole estate and replace with 300 luxury apartments with zero social housing included in the new build.

The mix of residents housed there by the council in temporary, emergency and private accommodation have been dispersed, many out of the borough and many into sub-standard private accommodation, the majority against their will. We have seen a letter instructing a tenant to move to Birmingham the next day and know of one case of a tenant bullied into moving to emergency accommodation for just 10 days before being moved again to another temporary property with such short notice her son had to return from school to find their home boarded up and a neighbour waiting with a note to let him know the address of his new ’10 day’ home.!

There are only 10 families left on the estate now, all waiting for eviction notices and the atmosphere is like an apocalyptic scene from a science fiction film. The eviction process does not seem to have been explained comprehensively and neither was the process for accepting offers of homes to move to and for some this has resulted in them being discharged from the responsibility of Barnet council to re-home them. It is a crime to knock down these houses – they are all in pristine condition and were only built 45 years ago.

Private renting in Barnet is almost impossible and letting agents require a minimum of £36,000 a year salary, some £50,000 in order to be accepted to be on their books. In September 2013 there were only 6% of landlords that would accept tenants on housing benefit, now it is virtually none. There were 18,000 on the waiting list in 2013 and the council dealt with that by abolishing the list! To address this crisis they have recently built ‘3’ council homes, the first for 22 years.

At present they have an unprecedented consultation in operation whereby they are proposing to raise council rents to 80% of market value or to the London Housing Allowance which will mean that many of those in need will not fit the criteria needed in order to qualify for a council house as the threshhold salary needed to be earned will be above the minimum salary allowed to qualify for need of a council home.

We believe that the intention of this policy is that Barnet Council – on paper – will be able to show that no one is applying for council housing, which therefore in theory cancels out the need for homes to be built. This will then achieve their real agenda, to get rid of future council housing in Barnet completely.

In different ways both West Hendon and Sweets Way residents are fighting backagainst this social cleansing. As well as the public inquiry West Hendon have a petition demanding to see the viability report, that all residents be re-homed on the estate if that is what they wish, and they now have over 130,000 signatures, the largest petition ever recorded in the history of Barnet Councils existence.

Sweets Way ex-residents have occupied an empty house and also have a petition demanding that the houses are not bulldozed and to be re-housed in the local area. Annington Homes have responded with a County Court Possession Oder but also an attempt to put an injunction on all the land. The case was adjourned to give us more time to prepare our case.

We need your support on Monday morning at the courts. Annington have a well-paid team of lawyers who will use every trick in the book to not only evict the Sweets Way social centre, but also to criminalise protest across the whole estate (where families are still living). This is potentially setting a very dangerous legal precedent for future housing protests and freedom of expression more widely.

Come out and make it clear that we won’t stand by as our right to protest is trampled with our right to decent homes. We will not give up quietly so regeneration can carry on unimpeded. We will continue to shine a light on the social cleansing at the heart of Barnet’s housing policies and Annington’s ‘redevelopment’ plans!