Posted on January 9, 2013 | Comments Off on CAMDEN GARDEN CENTRE RESISTANCE
On Tuesday we went to support the second resistance of the year, this time in a much loved community garden project in Camden.
Derelict greenhouses, left to ruin for over 12 years, transformed into a thriving community garden and arts space. A really inspiring use of urban wasteland. More about this amazing project here:

http://www.squashcampaign.org/2012/12/put-property-to-productive-use/
A colourfully dressed resistance saw off the forces of darkness in true community style . Numerous vans of police, a dog team and a helicopter were peacefully deflected by the 80 strong resistance. An aggressive attack on the group locked on outside the front gates led to one arrest and a few minor injuries. Once the chain on the gate had been angle grinded off, those inside the perimeter fought back with heavy barricades and sheer community power. People clambered to the roof and those on the ground piled pallet after pallet against the gates. Much joy was had when, after a frenzied attack, the cops, bailiff’s and security staff decided to call it a day. The residents of the Camden Garden centre sleep once again amongst their blossoming community garden.
Here’s the pic’s: 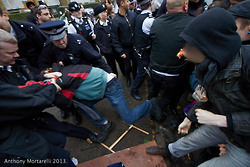 Well well well. 2013 arrived and with what style! The first week of the year kicked off with an EPIC 8 hour standoff between the forces of darkness and the resistance. A building owned by the crown estate, one of wealthiest property hoarders of the UK, was scheduled for eviction at 10.00am last Fri. However, as the property is awaiting planning permission (so it can be part-demolished and turned into – you guessed it! -Luxury flats!) the occupants saw no reason why they should be forced out onto the streets prematurely. A large group gathered in solidarity and there was a very fine display of resistance from all. Although the property was finally cleared, it took the forces of darkness pretty much the whole day to carry out their wrong doing. Several people were tweeting the action live as it happened; here are a few choice tweets/pics! Massive bigup’s to all those involved.

Comments Off on FIRST RESISTANCE OF 2013 – COME ON THEN LETS ‘AVE IT!