Posted on February 5, 2013 | Comments Off on ROUGH SLEEPER JAILED FOR SQUATTING

HOMELESS MAN SENTENCED TO 15 WEEKS FOR SHELTERING IN ABANDONED BUILDING 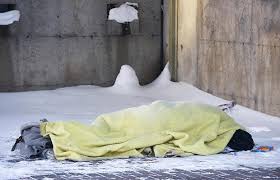 We’re saddened to report another vulnerable person has been criminalised under the new squatting legislation. The news is just in from a Daily Mail article we got forwarded today. It seems that the former soldier, 27, was suffering from alcohol dependency following the breakdown of a relationship and as such had lost his accommodation. He had been sleeping rough until he found a boarded up building to shelter in at night. The article goes on to say that, following a tip off, the police entered the building on the morning of the 31st Jan and, on finding him asleep, gave him 20 minutes to vacate the property. He allegedly refused to leave (we’d guess he probably fell back asleep) and thus was arrested for squatting in a residential property. The outcome? 15 weeks in prison.

This new legislation is continuing to do nothing but  show just how cruel and inhumane it is. This individual clearly needed support, not a prison sentence. In his words ”I now sleep in the abandoned cars in King Street. I am an alcoholic and I need alcohol to survive. I have recently started suffering severe fits and if I don’t drink they get worse. I am scared I am going to die”. And this was said to a journalist last August. It would seem there has been a massive failure in getting this man the support he so desperately cried out for.
Other thoughts:  I think we’d all agree it’s been pretty chilly for the start of 2013. Wouldn’t you try to find a roof over your head than sleep outside in freezing temperatures? And who was the victim of this ‘crime’? That the police were responding to a ‘tip off’ suggests that it was not the property owner who reported him, more likely a bored, daily mail reading neighbour. And that the police were able to enter though an open door meant he was not attempting to deny anyone access to the property. To us, it seems the only crime that has been committed is not getting the appropriate support to this man who was clearly in need.

For those who can stomach to read the Daily Mail article, here’s the link:

Want to take action against the criminalisation of the vulnerable? Join us in supporting  SQUASH with their new campaign to repeal section 144 of the LASPO Act. Sign online and share the e-petition far, far and wide.

Solidarity to all. Keep safe.

This entry was posted in crisis, shelter, squat, squatting. Bookmark the permalink.