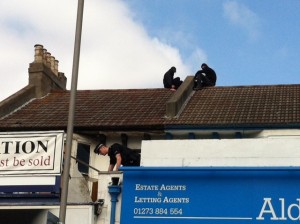 Epic standoff between Brighton squatters and Sussex police yesterday as new anti squatting legislation is used for the first time in Brighton. It took the police three hours to smash through barricades only to find squatters super glued together in the attic! Three were arrested, despite not actually living in the property, and to our knowledge are still in police custody. Full story here:

Also, 5 others were arrested in Somerset yesterday in a police raid on a squatted residential property. Those arrested were aged between 16 – 18. We don’t yet know if they are going to be charged. Watch this space for updates.


Whatever they say, Squatting will stay!!